DO YOU REMEMBER CORONA?

Home » DO YOU REMEMBER CORONA? 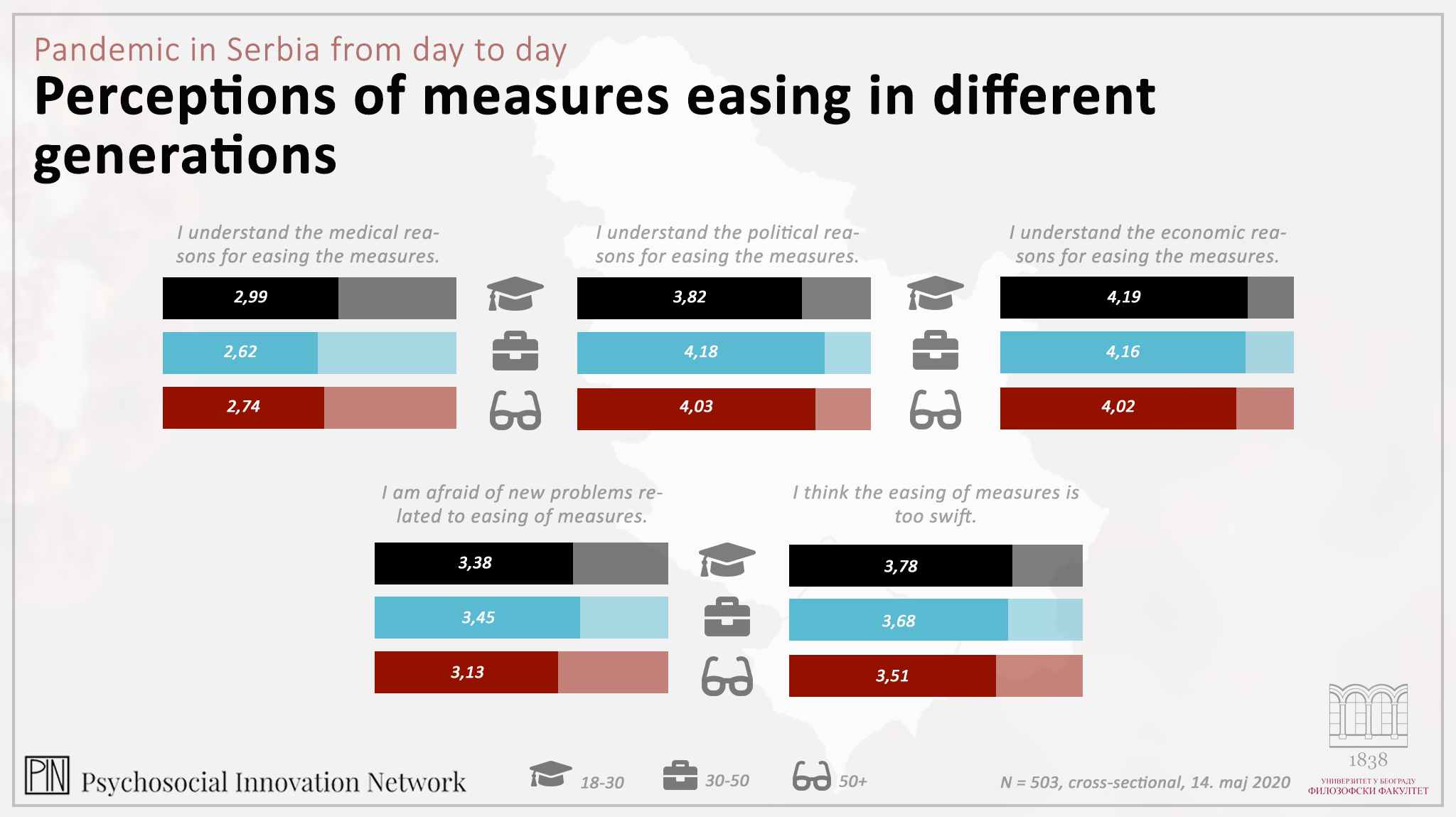 Although we were all in the same epidemic boat and the main psychological supports, such as feeling of control and safety of all of us were tested, the supports were not the same for all people. Therefore, this two-and-a-half-month pandemic state of emergency experience was not the same for all. Our elderly citizens were prohibited from leaving the house for month and a half, and times when they were allowed to go outside were very limited and differed significantly from the daily routine of the majority of them. Official explanation of the strategy that required pensioners to que for groceries at 5 a.m. was to “demotivated them” from buying anything else but the most essential supplies. At the same time a significant number of people of working age lost their jobs or their jobs became uncertain. The youngest adults continued with school, mostly online, but a large number of students were left without accommodation. In short, every one of us, although we were all in this together, was exposed to uncertainties and issues that were closely related to our age. Therefore, in this article, the last in the series, we will write about “generational differences”. We asked you what sources you use to inform about the pandemic and otherwise, how much do you trust these sources, how informed you consider yourself to be about coronavirus, how do you estimate your chance of getting infected and what do you think about easing of measures.

“The Feeling That We Know Something“

Our feeling about own knowledge about coronavirus and how well-informed we consider ourselves to be, which is measured as self-estimation of our knowledge about coronavirus, its spread and protective measures, has nothing to do with our age. Regardless of our age, we all think we have the important information about infection and spread of coronavirus, as well as about the symptoms and protective measures. It is understandable, considering that over the course of more than two months the information about pandemic were continuously reported in the media and we wanted to learn everything we could on the virus and spread of the disease. Although information presented and messages sent were confusing, it seems that we decided to side with one of the opposing positions, in order to avoid cognitive dissonance. In that way we created clear and robust beliefs, giving us an impression that we have a good grasp on the subject and a slight sense of safety. This is another confirmation of the finding from the beginning of observing the psychological aspects of the pandemic, which was that we often inform ourselves in order to calm down (to satisfy our so-called emotional needs) and not only to satisfy our cognitive needs (in order to comprehend something). 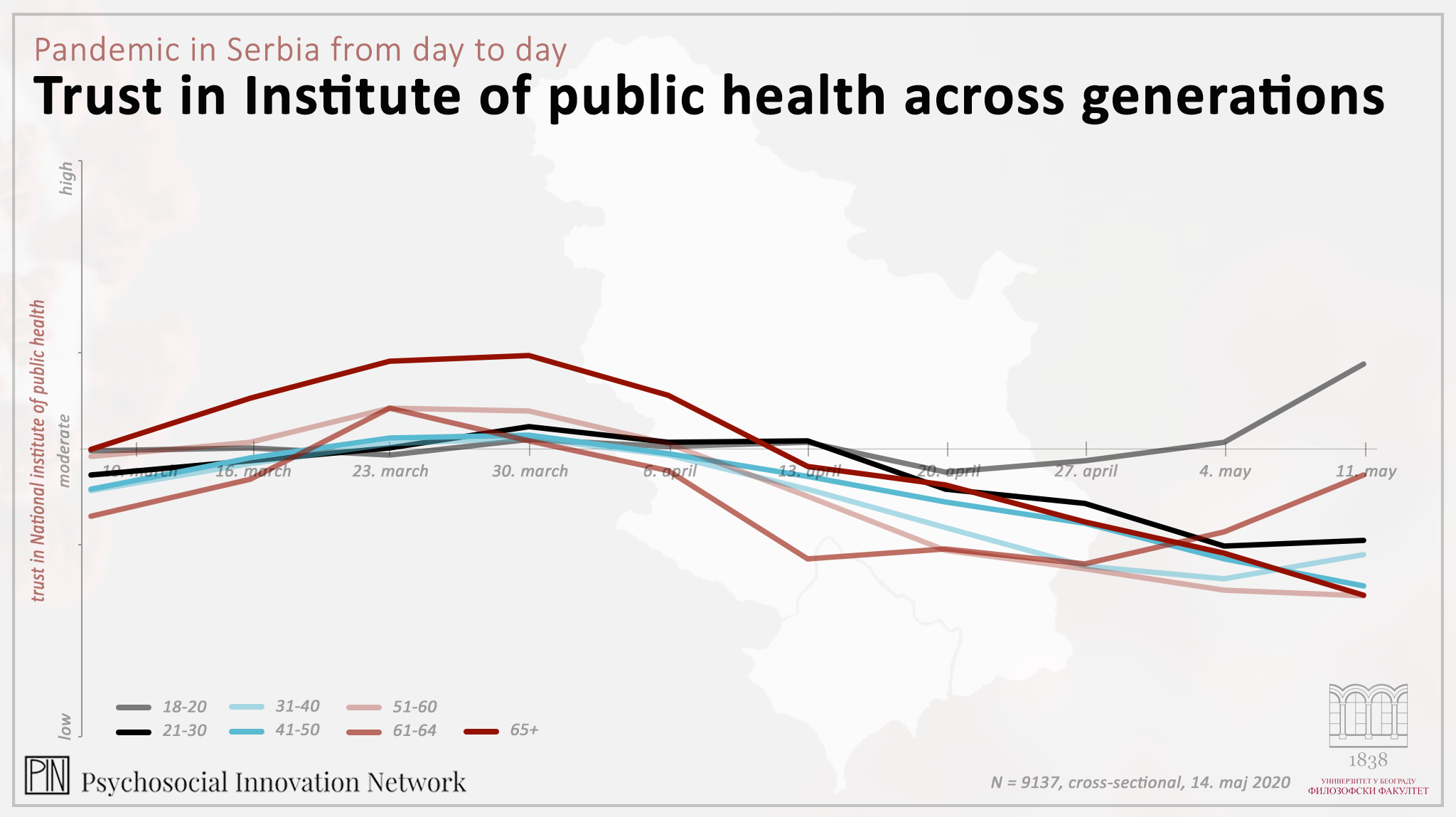 We assess the probability of getting infected by coronavirus as the highest if we are between 20 and 50 years of age. The older than 50 people are, they estimate the change of getting infected to be smaller, they are less scared that easement of measures could cause new issues and less they feel that measures have been eased to quickly, which is understandable, since it was exactly the oldest among us who were in isolation for almost two months. As for the reasons why measures were eased, this review once again showed that: all of us find the medical/epidemiological reasons the least clear, with people between 30 and 50 years of age (the same ones who estimate the probability of getting infected as the highest) and people over 65 being the most confused. It is interesting that these were exactly the groups that found the “political reasons for easing the measures” to be the clearest. Generally speaking, all age differences aside, economic and political reasons for “easing pf measures” are clear to everyone, speaking in average terms.

Who Is a Punker? The Old People Have Lower Trust in the System, but Trust the Doctors!

The older we get, we follow the news more frequently, both “before the age of coronavirus” or after it. Therefore, the older we are, we grow to trust more to traditional media, such as television and newspapers. However, social media comes close. Although not primarily meant to provide information, they are often used for this purpose. It is interesting that the older we get, we more commonly trust the social media as the source of information. In other words, the persons who say they grew up with the social media – 18 to 30 years of age – state that they have the least trust in the social media, while participants older than 60 have the highest trust. It seems that the most competent users are the most aware that social media is a fertile soil for disinformation, quasi-scientific information, conspiracy theories, etc. and therefore they have the least trust in information coming from these sources. However, it is important to note that traditional media are not spared from this kind of opinion. Sadly, today they are also used to present false and biased information. Besides media, we also relied on information coming from experts and scientific institutions. However, the older we get less we trust the experts, such as the ministry of health, scientists and the healthcare system as a whole. It seems that it is actually those with the largest experience with the healthcare system, in other words, those who used it the most, which are the eldest, among which there is the highest number of people with chronic conditions requiring regular treatment, are the ones with the least trust in the healthcare system and its institutions. On the other hand, trust in personal physicians grows with age, i.e. experience with treatment, which shows that there is a lack of trust in the system and not in the individuals – our doctors and healthcare professionals working in such system, despite all the difficulties. Trust in politicians is low regardless of the respondents’ age.

Who Trusts Whom When It Comes to Coronavirus

As for the information about corona, findings show that we generally don’t consider them credible, regardless of the source. We consider information presented by the scientists to be the most credible, while information from journalists are considered the least credible. The situation is similar when it comes to the information provided by representatives of the Ministry of Health and doctors during appearances on various shows – we do not consider information given by them to be particularly reliable. It is interesting that the younger we are, we consider information to be more reliable, regardless of their source. The reasons behind this is probably in young people being accustomed to getting information from various sources. If our findings were used in a game were you are supposed to guess the age of a person based on what he/she believes, it would be the best to ask the people how much do they trust the Ministry of Health, representatives of the medical chamber and scientists. Trust in information coming from these three sources makes the largest difference between the people of different generations.

For Those Who Want To Know More

Trust in a healthcare system, in general, and in its institutions, although not being at a respectable level before the epidemic, didn’t remain intact over the last two and a half months. Trust in the Ministry of Health, Batut Institute and the healthcare system as a whole grew by the end of the third and the beginning of the fourth week of March, as expected, at which time the media image was created that showed institutions making remarkable efforts on tackling the epidemic. During that period, the end of the third and beginning of the fourth week of March, there was a consensus among generations in terms of trust in the healthcare system as a whole and Ministry of Health, but not in terms of trust in Batut Institute. More precisely, an increase in trust in Batut Institute was much more pronounced among people older than 50 in comparison to the younger generations. Over the next month, during April, trust in healthcare system and Ministry of Health remained at relatively unchanged, moderate level, but the saying “the higher you fly, the harder you fall” could have been applied to Batut institute. Namely, over the second month, the trust in Batut Institute dropped with all respondents and became similar in all age groups. More precisely, this means that the highest drop in trust appeared in the age group which recorded the highest growth at the beginning, which is the group of people older than 50. Stratification by generation starts at the end of April – the trust in the healthcare system and the institutions starts to significantly grow with the youngest respondents and people between 60 and 65 years of age. In general, estimates of the youngest respondents were the most stable until the end of April, but from the end of April their trust in healthcare system and institutions started to grow significantly. It appears that out of all the available indicators, the youngest group based its judgement on the final indicators of performance of the healthcare system in dealing with the epidemics, so their trust increased when easing of measures was announced.