“ARE WE ALLOWED TO SHAKE HANDS?” – FREE, BUT CONFUSED 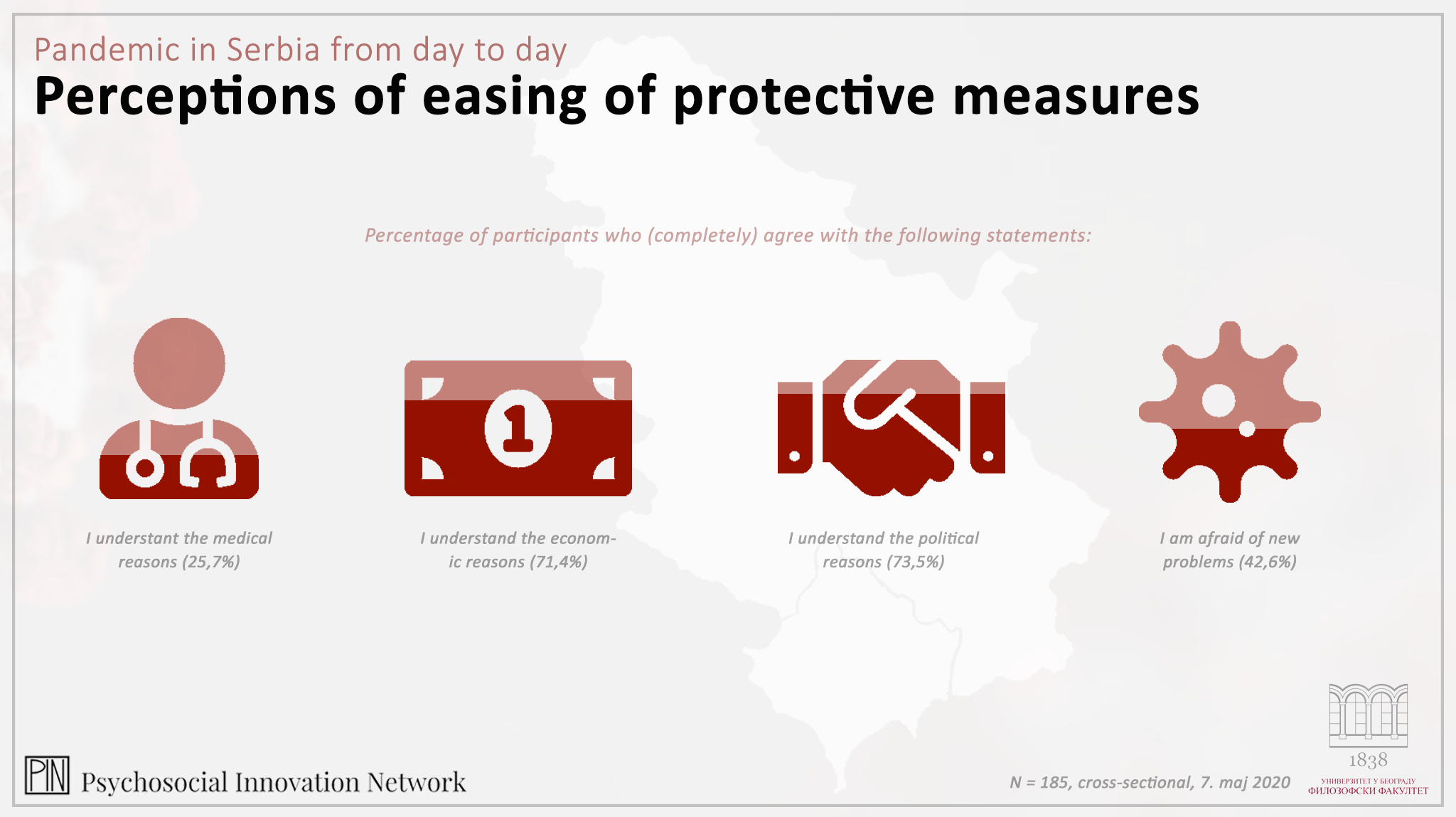 The virus is not gone, but the state of emergency is, along with many other “measures” that were considered necessary until this Thursday. Curfew disappeared as if it was taken away by a hand “washed for 20-seconds with soap and hot water”. For example, public transportation in Belgrade not only restarted, but it operates as if coronavirus epidemic never happened. However, the epidemic is still here, in force, but the measures aren’t. And when you separate the appeals of the epidemiologists from the other non-medical messages, they still unambiguously state the same: Be careful, reasonable and show solidarity, especially with our oldest citizens. This situation raises some new questions: Do you understand the reasons behind easing of measures? Did your concerns disappear with the easing of measures? Did the fear that every time we go out it may be our last time turned into a fear of going out?

From the perspective of regular people, there are three main reasons behind easing of measures: medical (epidemiological), economic and political. Considering how for over two months our worlds revolved entirely around the epidemic, how we learned a lot, both about the coronavirus and how to protect ourselves, others and the healthcare system, that was in danger of collapsing even without this situation, we should be able now to understand the medical reasons for easing the measures. However, that is not the case. The same is with the measures. They were not eased, the were lifted. Out of the three reasons for easing the measures, by far the least clear are the medical reasons. Only 26% of the people state that partially or fully understood these reasons. On the other hand, almost three times more people state that they understand political and economic reasons (71.4% and 73.5%, respectively). It seems that we are no longer primarily concerned with the real danger and the strict measures that suggest that there are reasons to panic. We are now primarily confused, and the fear of coronavirus becomes the fear of easing of measures and of the coming period. Accordingly, 42% of our participants fear that easing of measures could cause new problems. 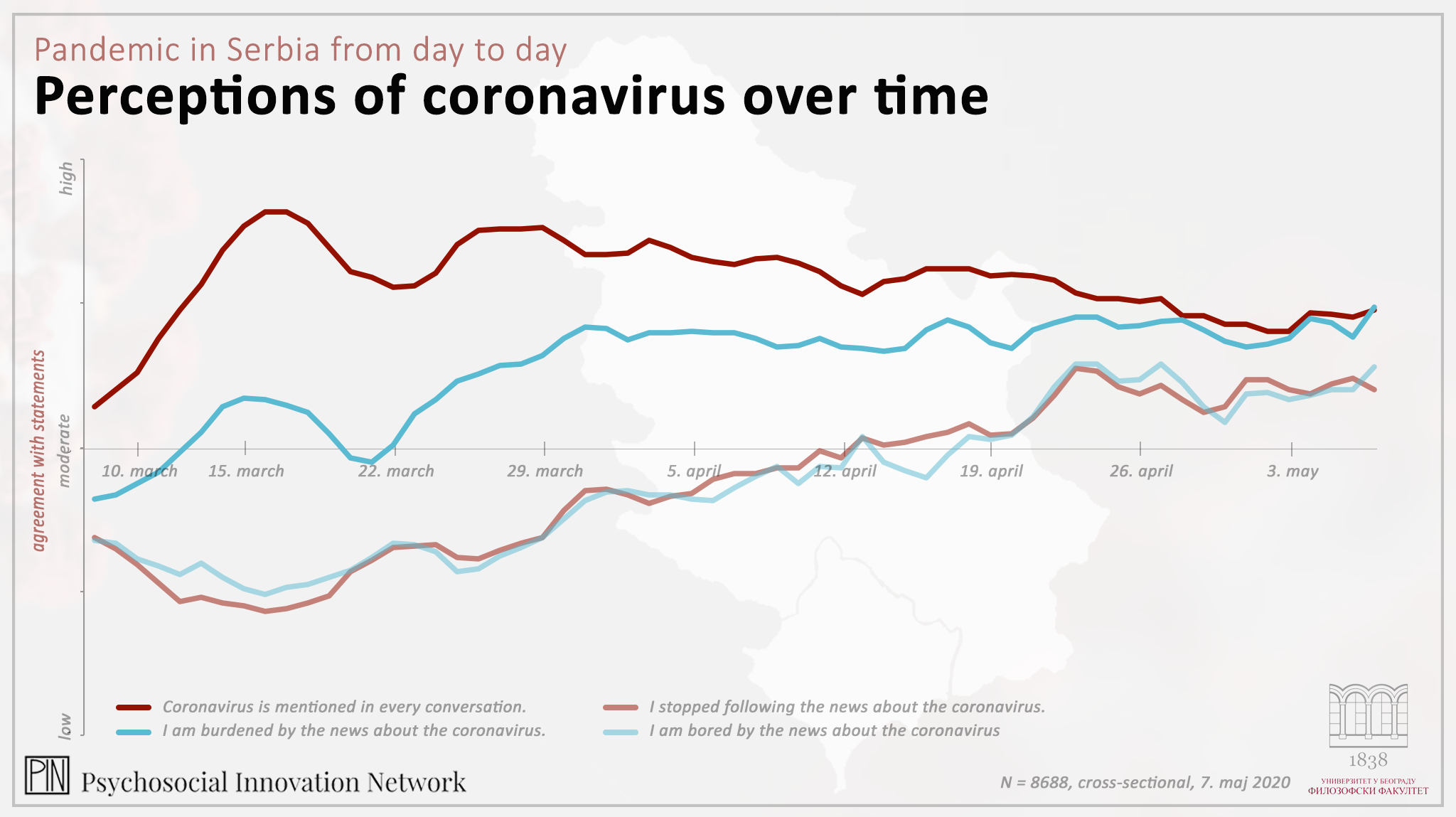 The Feeling That We Can Get Infected

As for the self-estimation of personal health, with more time passing by we more often start thinking we recently had the symptoms of the so-called coronavirus (Covid-19). At the very beginning of epidemic, we suddenly realized that there is a spreading infection, while the feeling that we can get infected and that it is a realistic possibility (subjectively estimated probability) increased until somewhere around 20 March, after which it started to slowly decline until the beginning of April and maintained at the same level from that point in time until a  few days ago. In the recent days, however, we observed a slight increase in fear of infection. This increase is related to the concerns about measures being eased too suddenly – the higher the fear we will get infected, the more concerned we are with easing of measures. Although this is not the final finding, because the measures had just been eased and we will continue to collect data for some more time, the preliminary analysis shows that the more the easing of measures scares us, the more we understand the political reasons for such decision.

The disease came a long way from being just a theoretical possibility to something material, which exists outside of our consciousness and conversations and happens in our near vicinity. From its beginning until today, there is more of us with every day who know somebody who was infected – by mid-March that was 10% of the sample, around 20% by the end of March and steady 40%-50% in the last month. So, every other person knows someone who had coronavirus. Vicinity of the disease has an effect on us, on our intentions and behaviour. Those who knew someone who got infected would rather visit a healthcare facility than the ones who didn’t know anyone, which indirectly confirms the trust in healthcare professionals and the medical profession. Besides that, those who knew someone who got sick are more afraid of easing of measures today, because the disease is seen as more real and more present by them than it is by people to whom epidemic is still within the domain of an idea presented in the media or on the Internet.

We lust for normal life, life topics and content which is not about coronavirus. Our findings show that today there are less and less conversations about coronavirus, we slowly stop following the information, such information becomes boring and tiring. We are returning to our old lives, the lives we had before the pandemic, but we cannot return to the emotional state before the pandemic. Between the beginning of March and today there was exactly two months of anxiety. The anxiety never disappeared, but it has changed: study conducted by our colleagues shows that has shifted to matters of everyday living, salary and future. This is also indirectly confirmed by our findings that people find economic reasons for easing of measures much clearer, than the medical ones. As already mentioned in our previous articles, the epidemic has mentally exhausted us.

What Would Happen If…

In psychological studies or in general when we ask a question “What would you do if X happened?”, for example, if you won a lottery, the answer a person gives never guarantees that he/she will actually act in that way. On the contrary, during the epidemic, implementation and efficiency of measures depends exactly on consciousness of the answer to the question “What would I do if I were infected?” is and on consistency of the intended behaviour. This type of consciousness is what makes us prepared. When we examine the answers to the questions about behaviour in the situation where there is a hypothetical, but an actual and present possibility, of getting infected, we see that a good job was done at the beginning and that the people received the message that self-isolation and social distancing are important. Readiness to self-isolate steeply grew during the first week and started to decline very slightly by mid-April. Besides self-isolation, people understood that they have to avoid meeting their family members and co-workers. By the end of March, participants stated that in case they were to notice any symptoms they would call a healthcare facility, instead of visiting it, in accordance with the instructions they were given at the time. The intention to contact the healthcare system, in one way or the other, was, as expected, highly related to the trust in Ministry of Health, Batut Institute and healthcare system as a whole. It means we trust our institutions and we would approach them for help if we needed it. 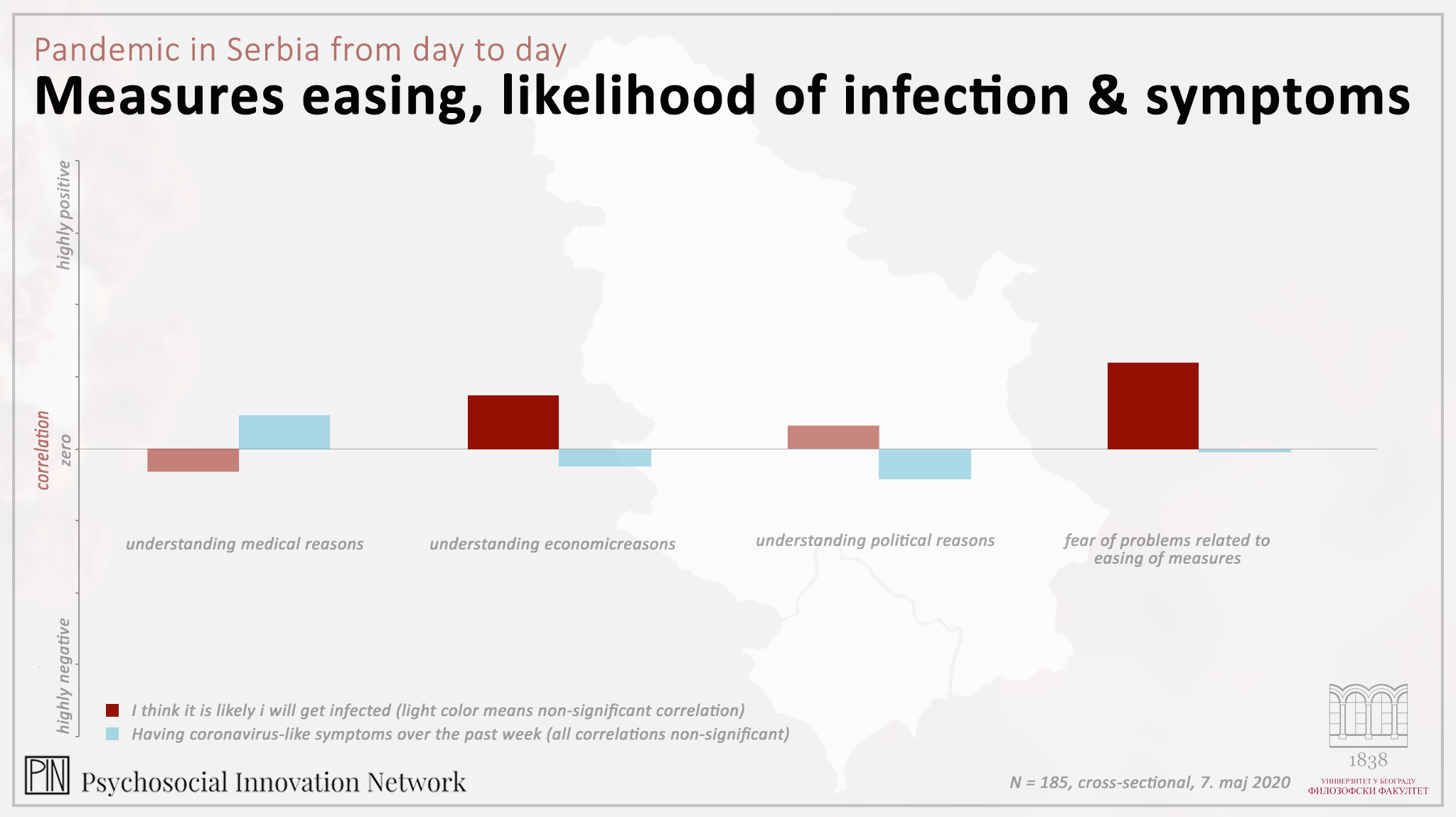 For Those Who Want to Know More

Finally, who’s afraid of the “big bad easing of measures”? It seems that people that were the most disciplined from the very beginning and who relied the most on the official policies during the epidemic were the ones that were afraid the most. Those are the ones among us who we would call the most obedient. Those are the people who immediately self-isolated, avoided their family, who would call and visit a healthcare facility and who still mention coronavirus in every conversation they have, who did not stop following the news and who don’t find such news boring, who are concerned about the children, who know someone who was infected, who believe the traditional media and healthcare professionals and scientists, but not the social media.

The fear caused by easing of measures is not related to gender, age, employment status and education – which means that the fear, as the ones measured before, is common, and that both men and women, young and old, employees, pensioners and unemployed are equally afraid.